Atlanta (by Alex Garvey, age 8 or so) 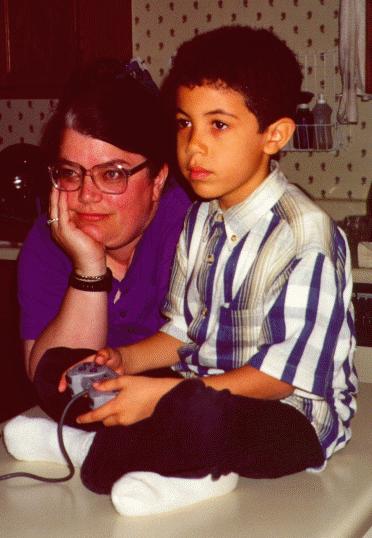 One day my mom said, “Some time soon we are going to go to Atlanta to see aunt Elenor for her wedding.”

“Okay,” I said not really listening very intently to what she said although I couldn’t wait to go to her house because I heard she had a pool in the backyard.

Finally the day came and we took forever at the airport just like all the other times when I went to Jamaica. It is so slow you would think it was snail racing. My legs got so tired and very numb from standing and walking in lines I thought they would drop off at any time.

After what seemed like an eternity we boarded the plane to go to Atlanta my mom is afraid of flying like a dog and smoke. I happen to not be so I like to be the devil and talk to my parents all about the disasters that could happen. Then I was interrupted by the flight attendant who had started the speech that no one ever listens to.

After the ear splitting, popping and pain part A.K.A. the landing we were picked by aunt Elenor and the man she would marry Michael Ray (that is his first and middle name instead of first and last but that is what we call him.) She told us all about the sights like the malls (there are way too many in the neighborhood)

It took a while but we made it to the house (I had brought a bathing suit fortunately so I could go swimming.) I got into the house and the first thing that caught my eye was the big screen T.V. (although I don’t see how it couldn’t catch your eye?)

She gave a tour of that I didn’t pay attention to at all until we got to the computer room which was amazing.

Then she told me about how my mom says I’m an expert at video games so she asked me to try to get farther in Crash Bandicoot. So I played games a lot.

In the morning I went swimming although not for long the pool was full of bugs. The wedding was that day so my younger cousin and a lot of other friends and family were there. We went to a few places like the office where they worked. When we got back, I went near the spa and fell in wearing the suit I was going to where at the wedding but now it was soaking wet. So she put it in the dryer and wore some thing else.

The wedding was nothing fancy just a priest to wed them and that about raps up the coolest trip to Atlanta.

The party after the wedding

The day before the wedding

Nephew Alex’s report on the trip

How Michael Ray and Elenor met

See our honeymoon cruise and our other cruises

Back to the family and friends index.