Entering the canal from the Atlantic side;
you can just barely see the first locks at Gatun, ahead.

The Crystal Symphony entering the Gatun Locks on the Atlantic side of the Panama Canal.
(Picture by Crystal Cruises)

The Chagres River is a bypass to allow water out of Gatun Lake.

The big white thing in the middle of the left-hand lock is not
a building, but a car-carrier that proceeded us through the Canal.

The Gatun Locks on the Atlantic side

It cost the Crystal Symphony $111,000 in tolls (in 1999 dollars) to go through the Canal. I didn’t take a picture, but at the Atlantic side were easily 25–30 ships anchored, waiting their turn to enter the locks. The cruise ships pay a (“small”) surcharge to get in when they arrive. It’s not cost-effective for cargo ships to pay extra, so they anchor and wait their turn.

The little rowboat below the Symphony is bringing out the lines that tie the ship to the little tractors called electric mules. They've tried motorboats, and shooting the cables across to the ships: nothing works so well as the rowboat!

Each (large) ship requires three mules on each side.

The electric mules that hold the ships square in the locks while the water rises. They work in pairs (left and right): One on the front of the ship, one about 1/5th of the way back, and one at the stern. The second pair (left and right) holds the tension on the ship while front mules climb the little steep hills alongside the locks because they must release any tension on their cables while they climb. 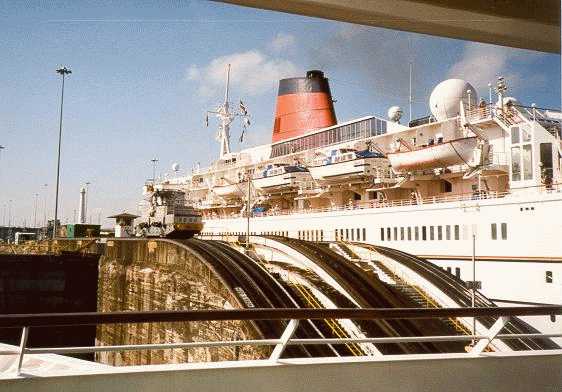 The lock gates are 74 feet high, and yet are so balanced and buoyant that it takes only a 40-hp motor to move them! You can see the short steep hills the mules must climb, at both the first lock and the second lock in the distance.

The front mule has released her line to climb the lock hill while the second mule holds the Symphony in place, along with the aft mule. Once the Symphony has moved into the lock, the first mules tightens back up and takes over, while the second mule releases her line and climbs the hill. (The aft mule just releases tension on the ship and climbs, because the first two (pairs of) mules can hold the ship still. There must always be two mules (per side) holding the ship in the center of the lock.)

The Cunard Vistafjord enters the right-hand lock, as the Symphony entered the left-hand lock.

Small workboats and pleasure boats usually fit in behind the larger ships.

The lock behind the Vistafjord, now swung closed, fills with water. You can see
the height differential of the water between inside the lock and the entrance below/behind.

The front mule next to the control tower Notice the lock-gates on the opposite side swung/retracted into the lock wall, to give maximum passing room to the ships.

A Maersk container-carrier followed the Vistafjord (and the tug and sailboats) into the right-hand locks (Here, again, you can see the height differential, and this is just the first of the Atlantic-side locks!) Plus:   Look down, too – you can't see the water from the Symphony – that's how tight a squeeze it is!

Out of the locks, into Gatun Lake. The mules start their trudge back
to the entrance to do it all over again.

Michael watching it slip past

The canal is dredged to 45 feet depth; the Symphony draws 25 feet.

Work continues all the time, because the walls keep sliding into the canal.
One slide caused the canal to be closed for ten months!

Two ships that pass in the… Canal?

In an delightful feat of scheduling, the Crystal Harmony and the Crystal Symphony (the only two ships in the Crystal line at the time) actually crossed paths IN the Canal!

Both ships “dressed ship” – ran up their signal flags to look festive – and
all the passengers crowded their decks to wave and marvel!

The Crystal Symphony next to the Maersk container carrier entering the Pedro Miguel locks,
the inner of the two lock-sets on the Pacific side (both ships going toward the Pacific).
(Photo by Crystal Cruises)

We had a brief heavy rain while we were in the Pedro Miguel Lock.

We saw lots of pelicans and herons.

(These mules were working the Maersk liner.) 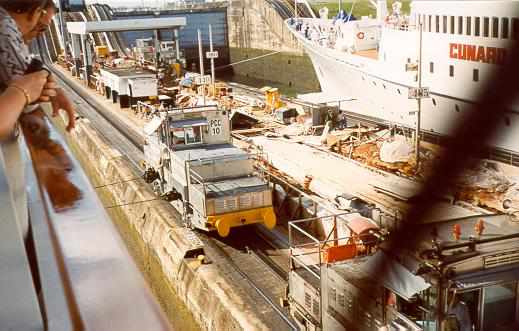 Out of the Panal Canal into the Pacific Ocean
(It took the Symphony about 11 hours to transit the locks.)